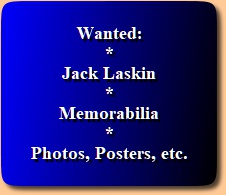 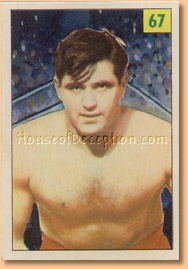 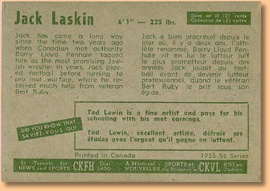 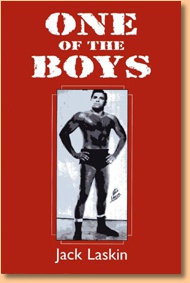 All snapshots in the photo gallery (right) were taken by Duff Johnson unless otherwise noted.

Jack Laskin
One of the Boys

In the article below, originally posted on Mark Nulty's WrestlingClassics.com, esteemed wrestling historian and sports writer J Michael Kenyon sheds light on a few of wrestler Jack Laskin's appearances in US and Canadian venues. (Laskin was known for his sojourning ways during his wrestling career.) Kenyon also alludes to Laskin's book, One of the Boys, to The House of Deception web site, and to the annual Cauliflower Alley Club (CAC) reunion in Las Vegas--all in his inimitable style.

For the benefit of those just being introduced to Jack Laskin and Duff Johnson – both always high or at the top of the list of those erudite CAC members residing in the Pacific time zone – let me assure you, Mascara Carmesi, that only one of them (insofar as I am aware) ever wore a mask. That would have been Mr. Laskin, especially during those years when he toiled behind the scenes for the Roy Shire promotion based in northern California and, when the need arose, filled in on the occasional card as wrestling’s most generic character – the Masked Marvel.

Seriously, CM [contributor Crimson Mask], thanks for introducing the group to not only Duff’s fascinating web site (he is, as you may have surmised, a teacher) and to Jack’s excellent memoir of his days on and around the mat. It is a good thing you have done while searching for, of all people, the irrefutably nasty Senor Assirati.

If anyone should be so lucky as to encounter either or both Messrs. Laskin and Johnson, I heartily recommend that you encourage them to belly up to the bar (it shouldn’t take too much of a nudge) and share some worldly views, as time allows. Each is a devout conversationalist of the highest stripe.

Oh, and by the way, Jack wasn’t always globetrotting. He spent quite a bit of his time working in North America, and for some of the best offices. To wit, a few bookings of his, here and there:

Oakland CA: March 11, 1960
(Auditorium)...Al Costello & Tom Rice w/Wild Red Berry beat Enrique Torres & Alberto Torres...Ronnie Etchison beat Ramon Cernades...JACK LASKIN drew Bud Curtis...Promoter: Ad Santel...NOTE: An Oakland Tribune story from a day earlier details how Santel, who has promoted in the Auditorium since 1932, could be in danger of losing Friday nights to Roller Derby once his current lease expires at the end of June -- but the City Council appears to be in his corner.

Jack Laskin has left the world. He will not be returning. Enough is enough! He's done it all; from the shmatah business to professional wrestling all over the world, then for ten years, a successful Fuller Brush Man, then a salesman, then computer service bureau, then marriage to Audrey, then a collection agency, then a Public Speaker on the "Pro" circuit, then a move to Penryn in 1989, then retirement, then volunteer Jewish Chaplain at Folsom Prison and two major hospitals, then retirement again after he lost Audrey in 2008,and just officiating at weddings and funerals, etc. When he lost Audrey, he lost his best audience and critic. There was no one left to impress. His humor was outdated. His last creative act was writing this obituary, just to be sure all the facts were there. Jack was a member of Temple Or Rishon and doesn't want any flowers. You want to send flowers, go to somebody else's funeral. Better you should send a donation to Temple Or Rishon for the building fund or to the heart or cancer fund. Or take some kid and buy them a book and say it's from me. But you can put your name in it too. Me and you, we did something nice together. Jack was born on March 13, 1929 in Hamilton, Ontario, Canada and is survived by everybody. His last words to one and all: "It's been a pleasure." Friends are welcome to attend the funeral Service, Wednesday, December 1, 2010 at 1:00pm at Sunset Lawn Chapel of the Chimes, 4701 Marysville Blvd, Sacramento, CA 95838. Interment Sunset Lawn Memorial Park.