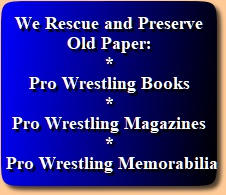 Below are two photo galleries of wrestlers who worked in London during the Golden Age of Pro Wrestling.

Please contact us if you can name the unidentified wrestlers or make corrections. You will be credited unless you decline.

Many thanks from The House of Deception to Alan Purves, Steve Mitchell, Phil Thomas, David Swainston, Martin Davies, and Lorraine Rhodes for emailing corrections for this page!

"The History of British Wrestling" by John Lister

"The History of British Wrestling" by John Lister

Many thanks to Lorraine Rhodes, Lee Sharron's daughter,who wrote to advise that the wrestler identified as Lee Sharron is in fact not him. We will change the caption asap.

Martin Davies (Guilsfield, Welshpool, Powys, Wales) disagrees: "The wrestler between Bob Francini and Colin "Bulldog" Joynson is not Harvey Smith. It's definitely Terry Jowett who was the tag partner of Johnny Eagles in the White Eagles tag team. He bore some resemblence to Sean Connery and I saw him once wrestling as "007 Bond".