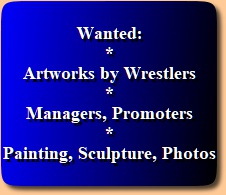 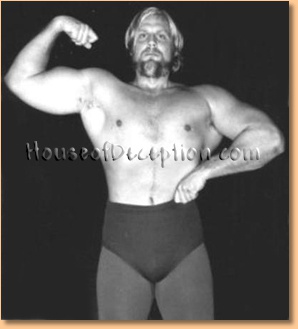 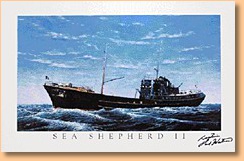 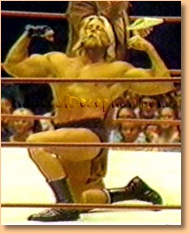 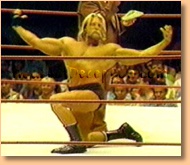 Los Angeles artist Stephen Cepello wrestled under the name Steve Strong in the late 1970s when he was a tag-team partner of Jesse Ventura.

He painted Minnesota's official portrait of Governor Ventura and another portrait that hung in the governor's mansion. See them both in the gallery below.

Minnesota's most unorthodox governor came back to the Capitol for good Thursday.

Gazing searchingly into the distance, his precious Navy insignias on his lapel, Rodin's "The Thinker'' at his side and a lit cigar in his hand, former Gov. Jesse Ventura is depicted as a serious-minded visionary in his official portrait.

The oil painting, by an artist who was Ventura's tag-team wrestling partner in the 1970s, was unveiled and mounted at the Capitol, the 38th such portrait to grace the halls.

"It captures the unique elements of his personality and style and strength,'' said Ventura's successor, Gov. Tim Pawlenty, who attended the ceremony. "It's playful, yet serious and strong.''

Ventura attended but chose not to speak at the unveiling, leaving those duties to his wife, Terry, spokesman John Wodele and the artist, Steve Cepello.

Ventura glared at reporters who tried to approach and responded to their questions with stony silence. A radio reporter said Ventura grabbed his microphone and dropped it on the floor when he tried to tape Ventura's conversation without Ventura's permission.

It was Ventura's first official visit to the Capitol since he left office in January. He was elected in 1998 as the nation's only Reform Party governor (later breaking away to form the Independence Party of Minnesota).

His nationwide fame and cachet with independent-minded voters was such that Vice President Al Gore courted him during Gore's 2000 presidential campaign. Ventura did not seek re-election last year, when the post-Sept. 11 economy had blown holes in the state's budget, and now has a weekly show on the MSNBC cable television network.

He sat in the front row with family, friends and former aides, watching as Cepello and Brian Szott, curator of art for the Minnesota Historical Society, pulled a string and unveiled the painting.

The crowd rose and gave the artist and his work a standing ovation. "I sat in front of my easel and I pondered - was this to be a memorial, or maybe a stay of mortality, or a testimony to a fiercely independent personality of my friend Jesse?'' said Cepello, who wrestled with Ventura under the name "Steve Strong'' and still has long, surfer-blond hair. "I chose them all.''

The painting shows Ventura in an outdoor setting, with an ominous, dark sky contrasting with the light illuminating that familiar shaved head and rugged face. Ventura wears a blue suit, a red, white and blue tie and the one element he insisted on: insignias from his days as a Navy frogman in the early 1970s.

One hand rests on the famous image of Rodin's "The Thinker,'' which figured prominently in Ventura's inventive television ad campaign in 1998. Another holds a lit cigar - a Ventura trademark that is sure to make waves in anti-smoking circles. A golf hole symbolizing his favorite pastime, a train showing his commitment to light-rail transit, the Minneapolis skyline, the Capitol and the Mississippi River all appear in the painting.

It is a fairly traditional portrait for this most untraditional of governors. The emphasis is on policy and governance, not on his appearances with Jay Leno and David Letterman or his celebrated rows with legislators and the media.

"I think it's very realistic,'' said former Lt. Gov. Mae Schunk, Ventura's running mate. "It depicts who he was - the vision that he brought to Minnesota when he wanted policy developed…. I saw him in the meetings always being very serious, very sensitive, and very concerned about what's good for the people of Minnesota. That was Governor Ventura.''

Bill Hillsman, the advertising man behind Ventura's 1998 campaign ads, saw symbolism in the weather patterns. "I like the fact that the sky is ominous, but there's a crack of light on the horizon,'' he said. "The symbolism is obvious … the future is back to the Democrats and the Republicans, but there's still a glimmer of light on the horizon, which means there's still hope for independents and third-party people.''

Toward the end of the ceremony, Terry Ventura said, "Are you feeling like talking today, husband?" He shook his head and she concluded the event. Ventura kept reporters out of a reception in a public Capitol hallway, but allowed a crew from MSNBC.

Bill Werner, Capitol reporter for WMNN and the Minnesota News Network, said he tried to tape Ventura as he chatted with a former commissioner in the Capitol before the ceremony started. Werner said Ventura grabbed the microphone, dropped it to the floor and told him not to tape him without his permission.

John Wodele, Ventura's longtime spokesman, said he was unaware of the incident.

On Wednesday, Dan Creed, who lost his job in 2002 as manager of the Governor's Residence, called a news conference to talk up his new book about the Ventura family and their use of the building. Wodele said Terry Ventura was deeply hurt by the book, which is titled "Governor Ventura: The Body Exposed.''

St. Paul, Minn. - Chalk it up to "The Da Vinci Code," but folks in Minnesota's Capitol are squinting for hidden meanings in a new portrait of ex-Gov. Jesse Ventura.

For the state's most colorful governor ever, the painting unveiled last month is fairly traditional.

That may be why, as tour guides note, many viewers are looking for more.

"A magician can never say anything about his magic," said Cepello, like Ventura a former professional wrestler. "I'm not going to deny or say that there isn't anything there because there could be. There could be."

To be sure, the painting is full of obvious symbols.

Behind Ventura, viewers can plainly see a light rail train, a pet project of Ventura's, and there are Navy jump wings on the ex-SEAL's lapel.

Ventura's hand rests on a copy of Auguste Rodin's sculpture, "The Thinker," a nod to one of his campaign ads.

But some tourists are sure they see cursive letters in the folds of Ventura's sleeve. A few swear they see someone else depicted in Ventura's tie.

Among the questions raised by the painting:

Why was Cepello quoted by reporters before the unveiling saying it would have references to Ventura's wrestling career if it does not?

Cepello said he was misunderstood.

Is there any message on Ventura's sleeve?
Look hard enough, and it seems one can just about make out letters in the folds of a suit sleeve. Could they be W-W-F, representing Ventura's old employer?

How about the face on the portrait's "The Thinker." He appears to have a mustache in the painting, unlike in the original. Is someone else depicted?

Bill Hillsman, the adman who created the Thinker spot for Ventura's '98 campaign, thinks the figure in the painting looks a little like Cepello himself, a large man with long golden hair and a prominent mustache.

"Maybe the artist paints in little pictures of himself?" he wondered.

No, Cepello answered, there is no mustache on his Thinker, only a pushed-up lip.

Could there be another face in the folds of Ventura's American flag tie? Like one of those illusion posters: Stare long enough and a head seems to jump out at you.

Cepello said he did joke with Ventura about hidden messages. He said he told Ventura he used degenerative oil and, eventually, "it will begin to deteriorate, revealing a naked Jesse with a pink boa."


About the Artist
(source: Moose Attitudes)

Stephen Cepello divides his time between Los Angeles and his studio in the mountains. There is a physical and spiritual grandeur to painting.

He was raised and educated in Arizona. Although not exclusively a southwestern painter, Cepello is passionate and sensitive to his home state's history, and subsequently, a knowing guide for anyone with an infatuation with the Old West.

His work is in major collections across the country.

In Hawaii, where he lived for years, he was known as one of the most respected and top selling seascape artists. Knowledgeable collectors of nautical works prize his oils for their extreme attention to the minute detail and exacting authenticity

He is also an artistic authority on marine mammals and actively engaged in aquatic life preservation. He is on the board of directors for the Whale Rescue Team, an organization whose mission is to free entangled whales and endangered sealife.

When Cepello was invited to present his hugely successful one-man show at the prestigious Ashcroft Gallery and Museum in Scottsdale, Arizona, his paintings were said to echo the mastery of Henry Farney and Charles His technique and vision may well be compared to N.C. Wyeth, or Russell, but his paintings are uniquely, and superbly, Cepello.

With unprecedented skill and the fiercest of emotion, Stephen Cepello's work mesmerizes the viewer by surging into burning sunsets and vast mountainscapes; canyon gorges breaking for violent running rivers and towering rock walls that jut in relentless glimpses of sheen; or stagger one's senses with a single isolated figure in the wash of the wind, recreating both the tumult and the silences of a vast empty landscape. Stephen Cepello is eminently deserving of the Hague International Exhibition Award. He is also the recipient of the coveted Louis Whitney Kassler Award.

His Gallery associations have included:


See our other wrestler artist galleries: